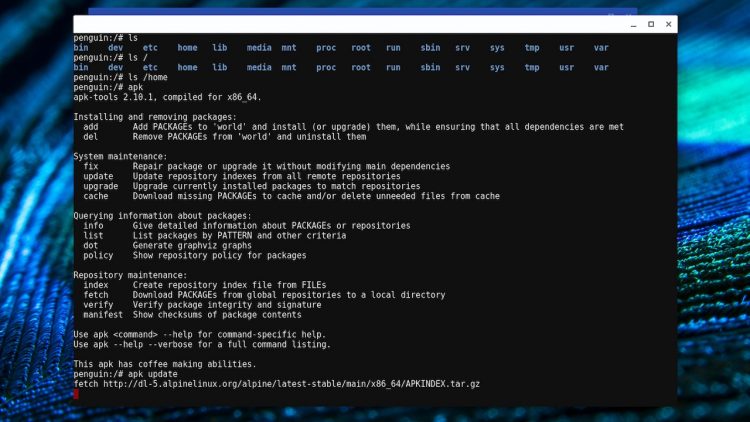 Alpine, here in a vm, is usually gui-less

Before we look at what this news could mean, let’s take a quick recap of what Alpine Linux is and where it’s more commonly used.

What is Alpine Linux?

Alpine Linux is a small, streamlined Linux distro based on musl libc and busybox. Although initially aimed at routers Alpine has snowballed to become the leading Linux distro for Docker containers.

Alpine is super lightweight, super small (a base image can be a mere 8MB), and it’s super secure too — and this latter claim isn’t merely marketing, either.

Alpine is built around a battle-hardened Linux kernel and, as the project website notes: “all userland binaries are compiled as Position Independent Executables (PIE) with stack smashing protection.”

If you’re interested in the PinePhone and other Linux-based mobile technology you’ll surely have heard of postmarketOS. And what’s postmarketOS based on? Alpine Linux.

Alpine Linux is so stripped back and minimal that it doesn’t come with a GUI by default (because, simply, it doesn’t need one).

That’s not to say that it can’t run one; it’s long been possible to install a desktop environment on Alpine Linux (it is, after all, Linux) but the distro being used as a “workstation” OS is, to me at least, an uncommon choice.

Alpine is very much in the Arch Linux mould: it gives you just enough to get started, and it’s up to you to build out from there. Just like Arch, Alpine has a comprehensive wiki.

But before you get too excited by all this desktop talk I should stress that you can’t head out and download an Alpine image with a desktop environment preinstalled, configured, ready to run.

Which is why the introduction of “initial support” for KDE and GNOME desktops is all the more exciting — is this our first hint that Alpine has bigger, more computing ambitions?

Alpine Linux 3.11 has more to offer besides the first glint of GUI desktop support, including:

Naturally there are also major updates across the package set, including GCC 9.2 as default compiler, Busybox 1.31.1, and musl libc 1.1.24.

It’s somewhat interesting that the distro is also introducing some of the components needed to support Linux gaming.

You can download Alpine Linux in a variety of images, including ones designed for the Raspberry Pi 4, direct from the project website.

Could users soon be scaling Alpine Linux in search of their next desktop Linux distro?