Jenkins is the widely adopted open source continuous integration tool. A lot has changed in Jenkins 2.x when compared to the older version. In this Jenkins tutorial series, we will try to cover all the important topics for a beginner to get started with Jenkins.

In this series of posts, we will be covering various Jenkins tutorials which will help beginners to get started with many Jenkins functionalities.

We will be covering all the important topics in Jenkins 2 in this tutorial series which will get you started with the new core components.

ONLINE COURSE: Getting Started With Jenkins 2

This course teaches you the latest Jenkins pipeline as code from scratch with all its functionalities to take your code from development to production.

Note: You can get 10 days free access using the free trial

The following are the key things in Jenkins 2.X.

Jenkins 2.0 has introduced a DSL by which you can version your build, test, deploy pipelines as a code. Pipeline code is wrapped around groovy script which is easy to write and manage. An example pipeline code is shown below.

Using pipeline as a code you can run parallel builds on a single job on different slaves. Also, you have good programmatic control over how and what each Jenkins job should do.

Jenkins shared library is a great way to reuse the pipeline code. You can create libraries of your CI/CD code which can be referenced in your pipeline script. The extended shared libraries will allow you to write custom groovy code for more flexibility.

Jenkins X is a project from Jenkins for CI/CD on kubernetes.

Jenkins 2.0 has a better User interface. The pipeline design is also great in which the whole flow is visualized. Now you can configure the user, password, and plugins right from the moment you start the Jenkins instance through awesome UI.

Also, Jenkins Blueocean is a great plugin which gives a great view for pipeline jobs. You can even create a pipeline using the blue ocean visual pipeline editor. Blueocen looks like the following. 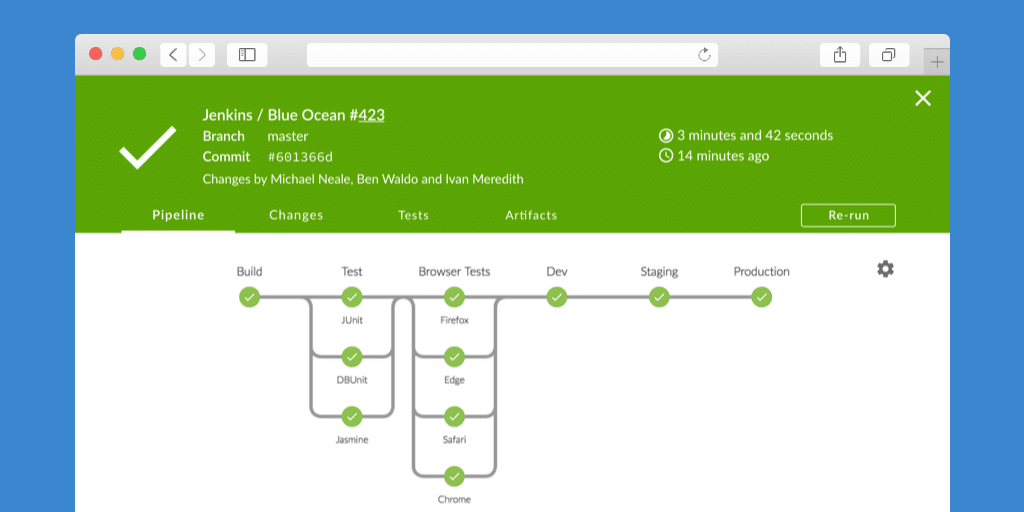